To the section for Switzerland of the Trento Bike Pages.

The two inline pictures below are courtesy of Tourist Information Rorschach am Bodensee. They were taken during the big freeze (Seegfrörni) of 1963.

The winter of 1963 brought the longest cold spell to central Europe in a many years, freezing the landscape deeper than it had in 100 years. Realizing that such weather probably would not occur again in my lifetime, if ever, I decided to do more than read about frozen lakes and deep frost, sitting at work in Stuttgart, where I was employed at the time. Having a brother stationed in the US Army in nearby Ludwigsburg, I devised a plan to travel to Switzerland to see the frozen lakes first hand, by bicycle of course. I convinced him and his wife that they should see the Alps in this amazingly clear cold weather and give me a lift to Zurich, a half day's drive.

Saturday, 2 March, dressed in knee breeches, double wool stockings, bike shoes, two jerseys and wool sweater, pig skin gloves and knitted wool cap, I loaded my bicycle in the trunk of my brother's 1958 Chevy Impala to head south. We took the scenic route B14 up the Neckar valley through Oberndorf, home of Mauser weapons, whose plant had been leveled to its foundations. However, Mauser precision instruments looked healthy, having been rebuilt after the war by the Marshall Plan.

From Rottweil we took B27 past Trossingen, home of Hohner accordions and harmonicas, and on to Schaffhausen (CH) where we viewed the ice at the famed Rhine Falls, the only waterfall on the Rhine between the Alps and the North Sea. Although not Niagara, just the sheer volume is impressive, as it drops 23 meters over cliffs. Although the flow was below average due to the cold, it was decorated with the huge ice formations.

We drove through Zurich to Adliswil, a pleasant suburb on the Zihl River, where we found a comfortable Gasthaus with a hearty Swiss menu and cool Feldschlösschen Bier. I wished my brother and his wife a good trip and went to bed for an early start before sunrise the next day. I had brought some food so I could eat before the crack of dawn, being aware that wheeled vehicles were prohibited on the lake within Zurich city limits. I rode on empty well lit streets to the lake near the Limmat Bridge to the Zurich Badeanstalt, a floating swimming enclosure that was out of the water for winter. I stayed clear of the Limmat, the outflow of the lake through the city, where the current prevented the lake from freezing.

The Badeanstalt is located where the greatest density of people are in the following picture. The pedestrian free area at the upper right is where the ice is thin from the Limmat outflow. 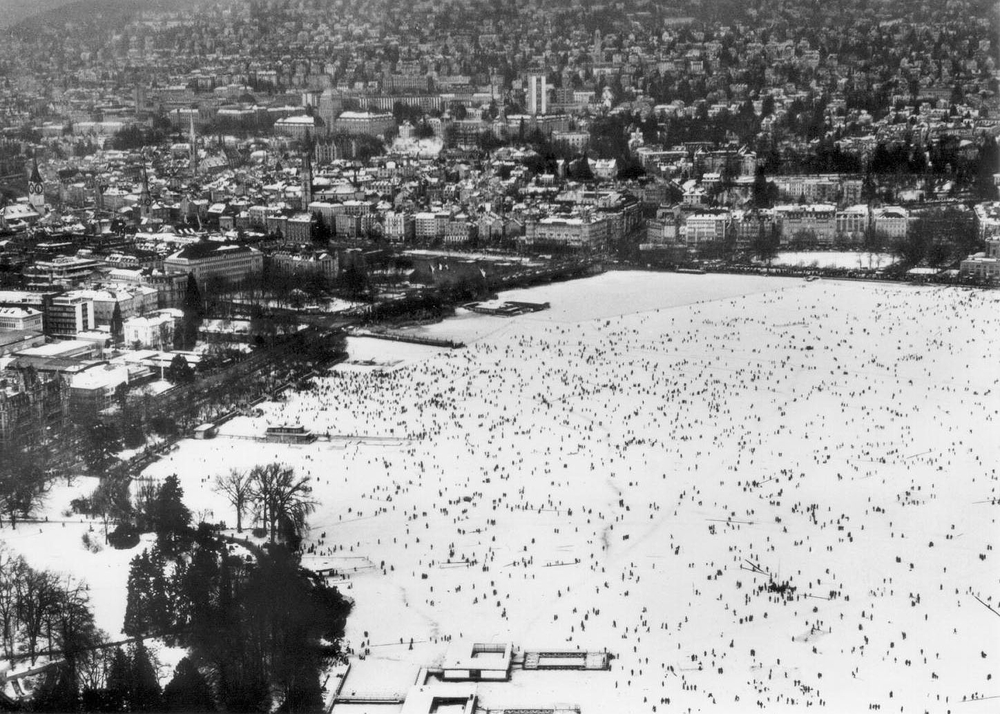 The ice was glassy smooth here, the sun and warmth from the city having melted the surface during the warmest part of the day. I walked down onto the lake and mounted my bicycle carefully. From having ridden on snow packed streets, I was aware that the best gear was the highest (50-13) to prevent undesired wheel spin that could dump me onto the ice. Traction would have been even poorer had it not been -20°Celsius.

Riding went well so long as I didn't exceed about 20 km/h, the speed at which air drag began to exceed traction. I stayed near the north shore where the ice soon was more snow covered, giving improved traction. Meanwhile, the southeast sky gradually took on a golden glow, long before the sun appeared as an oval orange blob on the horizon. The shore is lined with comfortable villas with boat docks and sheds, smaller boats having been hoisted into the rafters while larger boats were left floating in closely fitting openings in the ice. Openings kept open by bubblers.

I met a boat tender whom I asked to take my picture. Unfortunately he was unfamiliar with cameras, making it difficult to convey how to aim and release the shutter. I am partly in that picture, on the ice with my spotless Cinelli and its new Clement Campionato del Mundo tubulars.

I came upon ice that had cracked and buckled before re-freezing into ramps that I detoured, because I couldn't climb hills on the ice and I wasn't sure of its stability although it seemed pretty solid. After about 27km, I reached the causeway between Pfäffikon and Rapperswil that crosses the divide between the upper and lower Zurich lakes. The ice ended here where the current in the narrows prevented freezing. I found an opening in the reeds on the south side where I could reach shore safely. Marshes usually have decaying matter with gas bubbles and breather holes in the ice that are difficult to see, especially with snow cover as here.

I took route N8 over the causeway to Rapperswil where I got some muffins and hot chocolate before heading over the hills to Wattwil where I could see light at the far end of the 8.4km Ricken Tunnel as I crossed the tracks of the Bodensee-Toggenburg Railway. From here I rode up to St Gallen, before descending to Rorschach on the Bodensee (Lake Constance) and the big ice. The view from St Gallen, nearly 400m above this huge expanse of ice, surrounded by and equally white landscape, was an immense scene, one that I will always remember. The most prominent feature was the ferry channel between Friedrichshafen and Romanshorn.

After warming up over a tasty lunch, I headed down to Rorschach where droves of people were hiking across, their shoes leaving a straight track across the ice between the church steeples of Rorschach (CH) and Nonnenhorn (D), the only visible landmarks over the curvature of the earth. By now the temperature had risen to near zero, making the ice extra slick. Traction wasn't bad in the 10 meter wide footpath, but I couldn't ride amidst the pedestrians who wouldn't appreciate being hit by sliding bicycle. Spills were part of the trip.

I rode about 30 meters off to the west of the route, on clean ice, rolling along fairly well when I heard the first supersonic split. I suppose this is something one hears only on large lakes, having not heard it before on other lakes. Cracks propagate at supersonic speeds with an eerie report, similar to lightning that strikes nearby where the bolt makes a sharp crack with a tail of thunder. The difference is that the crack goes by without stopping, its report following.

These cracks, caused by temperature change, were apparently not a sign of failing ice, cars being driven on it without incident. A Vespa scooter also came by with a ski on a makeshift outrigger. What I hadn't anticipated was that some cracks had opened as much as 10cm and re-frozen. Ice having a density about 9/10 that of water, revealed that the ice was about a half meter thick, judging by the depth of the re-frozen grooves. Because these slots were not all perpendicular to my path, they were worse than wet railway tracks to cross. In fact a few caused me to fall and restart carefully on the ice that was wet from the afternoon sun on this windstill day.

I discovered how to brake with special care. Braking with the front wheel was out of the question, however, I found a technique using the rear brake that works well. Braking gently while pedaling lightly, just enough to keep the chain taut, the feet will sense when the rear wheel skids because a skid immediately reduces traction to almost nothing. The response to pedals stopping is fast enough to allow releasing the brake almost instantly to maintain control. Still, slowing down takes about the same distance as accelerating... much too long.

People driving motor vehicles on the ice from Germany got a rude surprise if they happened to meet a Swiss police patrol. Operating a motor vehicle on frozen lakes is not permitted here, so cars were impounded pending the owner's appearance before a magistrate in the Swiss municipality. Because this couldn't be done on weekends, it required taking the train home and returning on an appropriate day for a hearing. However, bicycles were OK on the Bodensee.

I reached Nonnenhorn 13.5 km across the lake and looked back to see the hills above Rorschach and backdrop of the Toggenburg Alps glowing in the setting sun low in the southwest. I rode along the lake to Friedrichshafen on route B31, where I took a train home to Stuttgart, having accomplished an adventure that I will always cherish. I was fortunate to have picked the last possible weekend. In the following week the ice began breaking up, in spite of its depth.